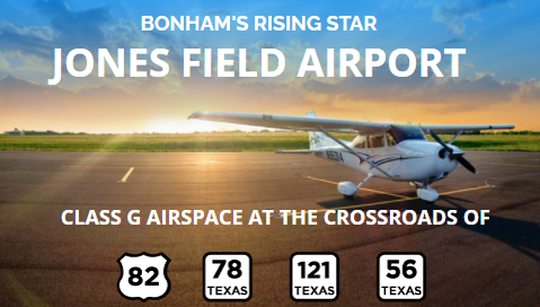 Jones Field Airport (F00), located at 2615 N Center Street (TX Highway 78), is owned and operated by the City of Bonham. Our public airport has a 4,000-foot by 75-foot asphalt runway aligned on 17/35 degrees and features a Terminal Building flight planning room, pilot's lounge, 100LL AVGAS Fuel and Jet A.

Jones Field is a fully operational general aviation airport that caters to industrial, business and recreational users. The airport averages 5,700 general aviation aircraft operations annually, an average of 15 per day, with 47 aircraft based here. On any given day visitors can see various aircraft coming and going, including small planes, private jets, and local crop dusters. 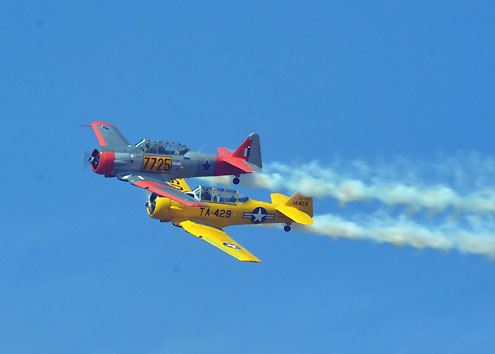 In the late 1920s, Charles Jones coupled a desire to honor his father's memory with an interest in his newfound passion - flight. On November 26, 1928, The Bonham Daily Favorite carried a headline announcing that Jones was giving a $10,000 gift to the city to be placed in a trust for building an airport. In a statement accompanying the gift, Jones noted the airport donation was a memorial to his deceased father, George W Jones, a long-time resident of Bonham. The city matched the generous contribution. The new airport opened on November 11, 1929. On June 25, 1941, a government contract was approved establishing the Bonham Aviation School as the civilian contractor for the 302nd Squadron Flying Training Detachment assigned to the United States Army Air Force (USAAF) Gulf Coast Training Center (later Central Flying Training Command) as a primary pilot training airfield. Construction began July 1, 1941 to build hangars for 200 planes and buildings for personnel.

The first cadets arrived on October 1, 1941. At one time, Jones Field housed more than 800 cadets. The cadets were taught the basics of flying in the Fairchild PT-19 Cornell and PT-17 Stearman training aircraft and were required to complete 90 hours of primary flight training to graduate. More than 5,000 pilots trained at Jones Field from 1941 through the fall of 1944. With the drawdown of the USAAF Training Command programs, the last student flew at Jones Field on October 12, 1944. The flight school was inactivated on October 16, 1944, and the Jones Field was deactivated in the fall of 1945. For a number of years, Jones Field remained abandoned.

By the early 1960s, the 3,000-foot runway once again became the site for flight training, this time for civilian pilots. Renamed Jones Airport, the airstrip also served as the home for transit aircraft and local pilots involved in spraying operations.

More interesting details about the history of Jones Field can be found at the Fannin County Museum of History in Bonham.